Home Windows How Do you add an App to your Desktop?

When installing an app, at least a reference to this app will be included in the Windows Start menu. Finding and starting an app via the Start menu simply requires three clicks and perhaps even a search.

One way to always have apps you use frequently at your fingertips is to add them to your desktop. Each app that you add to the desktop is provided with a recognizable icon, so that you can easily find each app again.

Putting an app on the Desktop: What really happens?

Every app on our computer has such a program file with which the app can be started. This means that we can also manually start each app ourselves using File Explorer.

As an example, we will manually start the old web browser Internet Explorer via Explorer. However, in Windows 11, this will launch Microsoft Edge.

How to manually start an app via Explorer is as follows: 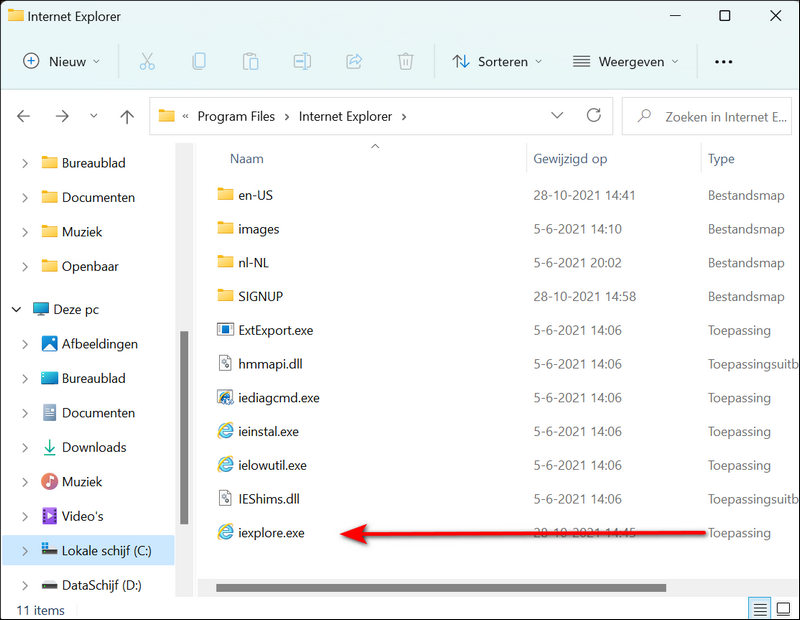 You will now see that the Internet Explorer app is launched and displayed on your screen. In Windows 11, this will supposedly be the Microsoft Edge web browser that starts up.

The same thing you just did manually via File Explorer, Windows will do for you in the background after you drop an app on the desktop and double-click the icon created when the app was placed on the desktop.

Adding an app to the Desktop: an Easy and a Hard way

When you look at the startup file iexplore.exe in Explorer, you will notice that a small icon is displayed before the name of the file.

This knowledge will undoubtedly make putting an app on the desktop easier.

Because all you have to do once you find the startup file of an app in File Explorer is:

When you then show the desktop on your screen, you will see that the app you just created a shortcut has been added to the shortcuts on your desktop.

The easy method for adding an app to the desktop

When you install an app on your computer, a reference to the app will usually be included in the Start menu . How to add an app to the desktop:

Again, an icon will be created on the desktop that will make it easy for you to recognize the app. An icon with a blue upward pointing arrow indicating it is a shortcut.

However, sometimes it happens that an app does not have its own icon. Windows will then provide the app with a global icon. Such an icon is of course less recognizable. But if you want, you can always decide to replace an icon with another that you find clearer.

Adding an app to the desktop can be done with one quick simple action. Whether this is possible depends on how the app is installed on the computer. Usually, as mentioned, a reference to the app will be added to the Start menu during installation .

If that is not the case, you can always manually add an app to the desktop via Explorer.

How to Easily Recover Deleted Files

Which is the best Antivirus for Windows 10?

Epson Printer Won’t Print: What Can You Do?

Printer Does Not Print: What to Do?

Geeks
If your printer is not printing at all, there could be a number of reasons. That's why we've put together a small checklist that...

We provide you with the latest Solution to your Errors with videos from the tech industry.
Contact us: contact@errorcodespro.co

Why Restarting your Laptop is Sometimes an absolute Necessity

How to Easily Recover Deleted Files

Clean your Laptop Registry in 9 Simple Steps and without extra...